Not so long ago, Denver was known as a “Cowtown,” hindered by a dull and dormant city center, an aging airport, and an arcane economy tied to the boom and bust cycles of the oil and gas industry.

Those dusty days are long gone. Denver’s downtown is now thriving, with a skyline decorated with construction cranes on nearly every corner.

National and international companies are flocking to The Mile High City as Denver’s resurrection builds momentum.

There are plenty of reasons for Denver’s emergence on the global stage. It’s not just about the scenery and mountains  When one factors in a well-educated employment base, high-level universities, and a Rocky Mountain backdrop, it’s easy to see why companies see Colorado as an up-and-coming player on the international stage.

The data does not lie,” said Jason Bollhoefner, a Partner with Benchmark Commercial.  “The research proves that Denver is on the map and part of the lexicon nationally and internationally.”

State organizations and leaders are doing their part to keep the economic engine roaring, with efforts to work with and lure international companies to Colorado.

A recent report from The Downtown Denver Partnership indicated that sales of downtown office buildings to national and international investors represented over 6 million-square-feet of space, worth about $2billion in value. 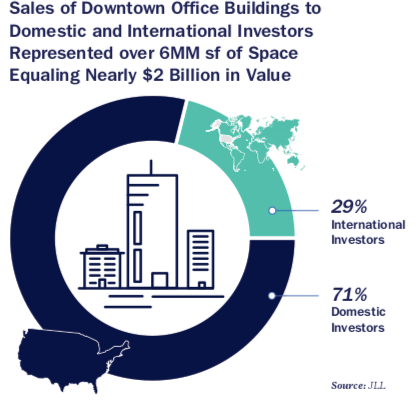 A recent report by The Denver Business Journal stated that from  2009 through 2018, 177 international companies from 34 countries invested in Colorado and completed 195 projects, created 7,215 jobs, and invested $2.1 billion in capital.  Companies that have recently announced expansion and relocation plans to the Front Range include: Amazon, Astroscale, AveAxis, Karcher North America, KPMG, PD Aerospace, and VF Corporation.

“The entire team at Benchmark Commercial is excited to serve our clients and conduct business worldwide,” Bollhoefner said. “ We making exciting strides to streamline portfolio requirements across the globe.  It’s increasing common for our clients to have offices in major markets across international borders and Benchmark  Commercial is dedicated to servicing our existing clients globally and to working with global firms requiring a Denver presence.”

Let’s have a conversation. Get in touch and hear what we can do for you. Call us today, or fill out our contact form, and we’ll get in touch with you.

or Get In Touch Now!

“Tanner Mason and the Benchmark Commercial Real Estate team knocked it out of the park representing me with the purchase of Office Interiors new showroom in Westminster in 2021. First class all the way…I only wish there were a few more stars I could click on. Strongly recommend them!”